A 35-year-old Slovak lady caused an accident on the Hungarian motorway M3. Her BMW X5 luxury SUV bumped into a Fiat Punto, which got burned out.

Three people died on the spot in the flames, one woman passenger passed away two days later in the hospital.

The police have found not only alcohol in her blood but some opiate as well.

It is believed that the driver fell asleep before the accident.

Real drama, but this is not the full story. 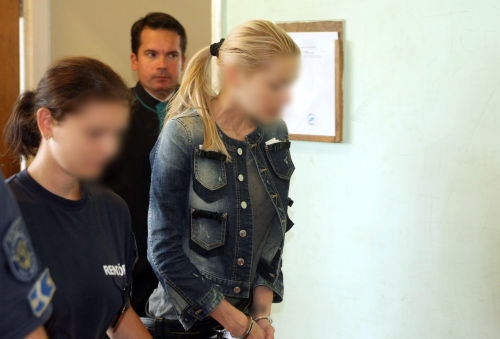 She looks quite miserable  (Photo: MTI)

The Slovak lady’s name is Eva Varholíková-Rezešova, a well-known millionaire,  which has probably has something to do with the fact that she is the daughter of the former Slovak minister and industrial tycoon Alexander Rezeš.

In Slovakia the lady has built up a rather bad reputation for her hunger for parties and men.

Now she is in custody in Budapest.

Eva Varholíková-Rezešova has not made a confession yet, but according to the eyewitnesses she looked miserable after her court enquiry today.