Peter Falk got a statue in Budapest

American actor Peter Michael Falk got a statue in the very centre of the Hungarian capital.

The unusual artwork in the unusual location perhaps needs some explanation.

Please, do not expect something very logical one.

The statue is erected in a street called „Falk Miksa”, which was named after a 19th centuryHungarian academic, writer and politician.

Accordig to the urban legends, he was the great grandfather of Peter Falk, whose jew ancestors – as it is written in Falk’s autobiography – came from Eastern Europe.

It sounds great but the problem is that there no any evidence for it, what is more, a couple of years ago a professional Hungarian archivist – after some research – denied this possibility. 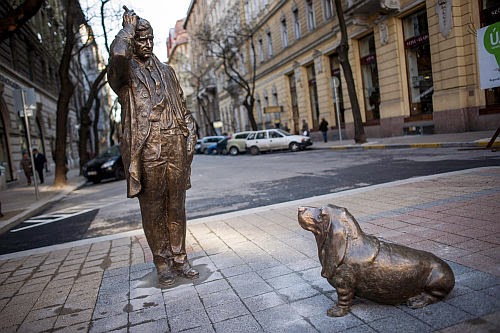 Here is Colombo and his dog in Budapest

Anyway, the statue is called „Colombo”. The character of the television film series was extremely popular in Hungary during the communism.

„If American millionaires kill each other at such a speed, the communism will win on its own” – commented on the series one of the Hungarian stand up comedian.