As a part of the course, Paul Verhoeven’ Basic Instinct was on, and after the screening the participants had the chance to discuss it with Joe Eszterhas, the writer of the movie and Andrew G. Vajna, who was its executive producer. 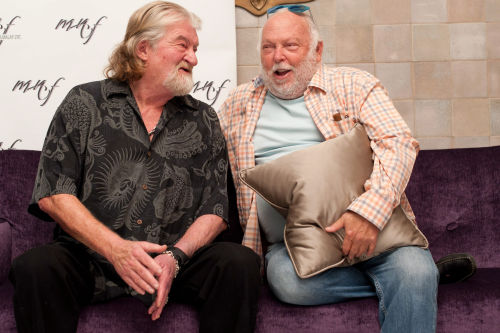 Vajna said they found Michael Douglas for the role of detective Nick Curran fast, but they had a number of nominees for Catherine Tramell. Finally they selected Sharon Stone, who became a star with this role.

According to Joe Eszterhas Basic Instinct is about the battle between good and evil, and in the first version of the plot, the devil won. Later, after a long debate, they changed their mind.

He also revealed originally he wanted a Rolling Stones song for the film track but the director insisted on film music composer Jerry Goldsmith.

The famous questioning scene, in which Sharon Stone re-crosses her legs and for a short moment it can be seen that she is not wearing panties, was also Paul Verhoeven’s idea.

Joe Eszterhas, who has arrived in Hungary with his wife and two children, said, it was very a touching feeling to come here, and he is very proud of his Hungarian origin.

He was 6 years old when went to the USA.

Andrew George Vajna was also born is Hungary. He emigrated to America in 1956 to produce a great number of box office hits.

Now he is a government commissioner in charge of the Hungarian film industry.