Hollywood director Oliver Stone is in Hungary at the moment to give „master classes” at Puskin Cinema Pin Budapest.

At a press conference he said that Hungarian audience is curious and asks him clever questions. 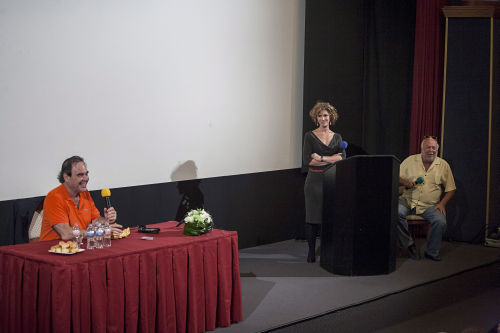 Oliver Stone is giving a master class in Budapest. On the right is Andrew G. Vajna filmproducer, at the moment a Hungarian Goventment Officer in charge of “renewing national film industry”.

Stone does not have too much time in Hungary because he is travelling round Europe to promote his new movie Savages.

During the conversation the director called the American television as ”one of the most destructive things in the world” and confessed that originally he wanted Maryl Streep for the role of Eva Peron in the film Evita (1996) instead of Madonna. The film, of which he was a writer, would have been much better , he said.

As for the Hungarian films, Stone mentioned Mephisto by István Szabó.