Some monts ago a unique exhibition opened its doors in Keszthely, in a town on the shore of Lake Balaton.

The Cadillac Museum houses one of the biggest collection in Europe, including such interesting pieces like the one, which appeared in Coppola’s The Godfather movie. 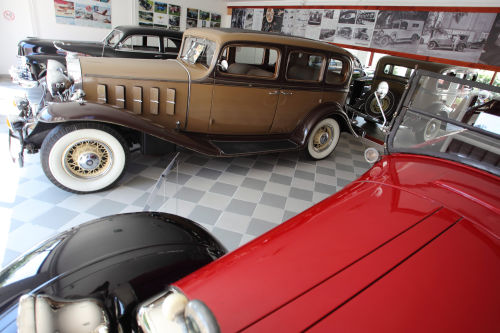 The Cadillac from The Godfather film

The bulk of the collection belongs to Gyula Garamvölgyi, whose childhood dream was the world of Cadillacs.

The first of his Cadillacs arrived from the USA only 4 years ago, which was followed some more.

Mr. Garamvölgyi usually buys the cars through American auction sites, sometimes the shipment costs more than the car itself.

The restoration work also requires a great amount of money, time and patience.

Now there are 12 Cadillacs on display, the oldest is a Cadillac Phaeton of 1923 , the youngest is a two-seated Allante of 1993, designed by Pinifarina.