Pedalling from Hungary to London by carbike

Two young sportsmen from Nagykanizsa hit the road on a special man-powered vehicle to get to the London Olympic Games.

The way there and back is calculated to be 4500 kilometres.

The carbike (in Hungarian: bringakocsi) is a typical Hungarian D.I.Y. product. It is designed and made by Gyula Szantner, known as a builder of more custom-designed bikes. 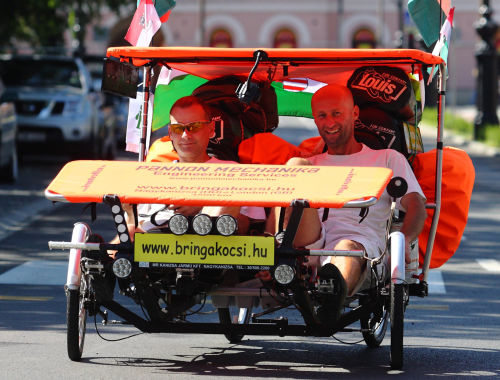 The metal framework of the bringakocsi comes from partly mountain bikes. The vehicle has a roof and a small boot for the luggage.

As far as the technical details are concerned, it has 21 gears and a rear wheel drive.

On their way Tamás Hegedüs and Sándor Hodák Sándor will cycle across Nagykanizsa’s two sister towns, Gleisdorf in Ausztria and Puchheim in Germany.

Before the start, as a warm-up, the two sportsmen have pedalled the bringakocsi more than 3000 km.