Video about the Hummer-killed Hungarian policeman

When this story happened in Hungary it quickly became international news.

In October, in South Hungary, an Austrian Hummer driver ran over a Hungarian police officer, who later died in hospital.

The story sounded as if an everyday road situation escalated into a massive tragedy.

The Hungarian media mainly blamed the SUV driver for the incident, partly because of the official police releases, party because in Hungary Hummer SUV has had bad reputation as a stereotype of a vehicle typically owned by rich and aggressive outlaws.

Today, the leading Hungarian news site Index.hu published an article which is based on the Austrian Kurier.at.

It gives a story a news twist, suggesting the Hungarian policemen might have made mistreated the situation.

The main new evidence is the video that was shot by another Hummer driver who was in the same convoy following the “killer’s” vehicle.

As you cansee, even with the help of this recording, is not clear what really happened.< 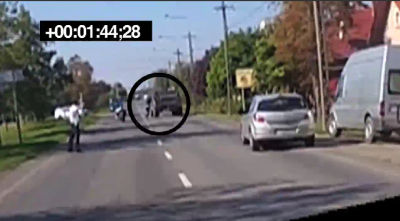 When the Hummer stops, one policeman jumps out of an Opel and holds a pistol in his hand.

In the film there are two police bikers as well. From the side, one runs to the Hummer and reaches in the car window.

Then, the driver suddenly starts the Hummer and runs over the other police biker who stays in front of the car.

According to the Kurier the police officer sprayed the driver, perhaps with paprika spray, and that might be the reason for the panic of the driver who could not see the policeman in from of him.

The Hungarian police haven’t reacted the media allegations so far.