In this photo János Pozerka retiree is watering his paprika fields with his self-made irrigation device. 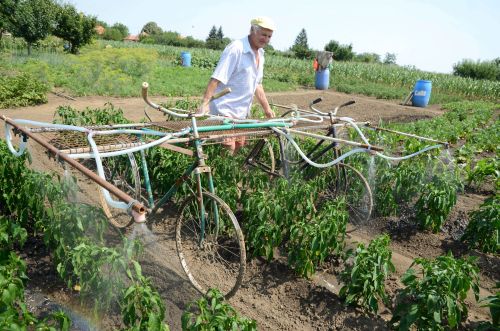 (The photo was taken on 4 July by János Mészáros, MTI)

The machine is constructed of old bicycles, hoses, pipes and metal grids.

As far as I can see it works properly.

It is an illustration of the general belief that Hungarian people are considered to be extremely creative at D. I. Y. things.

I heard that in Sweden and some other western countries if you have a male Hungarian neighbor, you have hit the jackpot. Because he can fix everything for you from the gas boiler to the garage door.

I don’t know it is true or just an urban legend, but it is definitely true that the history made us solve the everyday problems in an unusual way.