How to select a Hungarian Spa?

Yesterday a new spa was opened in Balvazújváros. Its cost was 1.2 billion HUF, partly paid by the EU – says the Hungarian News Agency. In the town it has been the biggest investment in the last 30 years and the decision makers hope it is a milestone of the local tourism. 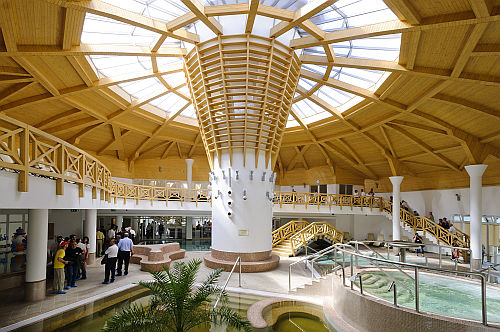 Well, I have managed to find this town in the map (it is in east of Hungary, anyway), but I have not found the website of the spa. I think it simply doesn’t’ have one, 1.2 billion was not enough to build. Never mind.It reminds me of:

Well, Hungary is not extremely rich in volcanoes, tropical islands, rocky coastlines or other dramatic natural phenomena, but, as compensation, it has so much thermal water that is enough for the whole continent.

There are more than one thousand wells which provides hot water, most of them medical water.

If someone wants to visit the country, going to a spa is a kind of must.

If you do this, select carefully.

Some spas of Hungary (Hévíz, Sárvár, Bük, Hajdúszoboszló and some more) have become well-known all over Europe, attract millions of visitors every year and generate a significant income for the towns concerned.

Their success was an example many other towns wanted to copy and this intension was supported by the central government.

As a result, every other town has built a spa and has been waiting for the visitors that sometimes have come sometimes have not. In the later case the new spa does not bring but takes the money from the locals’ tight budget. Some of them had to be closed.

So back to work: how to select a spa.

Well, I think there the two ways. Firstly, stick to the big above mentioned big names. No risk, you have a good chance to get a nice bathing time with excellent infrastructure and services at a relatively low price. These spas are professional tourist factories; they know what you want and you will be given that.

Alternatively, you can browse the smaller ones, like Balmazújváros. Yes, it is definitely a risk but if do not like the “tourist factories” it is worth a try. If you are careful, hardworking and lucky, you can come across small, remote spas which give you nearly the same as the big ones. Instead of crowd and main stream services you can get relaxation, a friendly atmosphere and a bit of the real Hungary.

Perhaps the spa you have selected makes a big loss and a headache for the local government, but this not your problem. Take the opportunity as long as it is possible.

Here is a usable starting point.